It has been that slow creep from silent defense shields in place to tiny snippets of less awkward conversation sometimes accompanied by an oh-so subtle smile...maybe not an actual smile, but certainly no longer a plaster-casted death mask expression. I think I'm a little constipated. Had a bulletproof coffee about thirty minutes ago. Weighed in at 152 lbs--down from 158 two weeks ago. That is all I have for now.
at January 27, 2019 No comments:

Ketogenic Diet, Husband is being a jerk.

I've been routinely cooking ketogenic meals for a few weeks now. DH wants to be on the diet. A friend recently had a minor stroke and we (along with many others) are taking care of him. Coincidentally, the friend's doc wants him on the keto diet so we are furnishing him with his meals. Tonight has been a weird night, just one in another of many weird nights. DH told me to "fuck off" when I came into the kitchen to help sort out the dishes he had unloaded from the dishwasher (they were dirty) and put into the cabinets. He said "fuck off" was meant in the spirit of Chef Gordon Ramsey. I can't recall the last time someone told me to fuck off. It made me want to fight back. Instead, I just sat down on the couch and wrote this. No, YOU fuck off. Turns out, later as he was looking very annoyed, he admits that he is quite annoyed with an earlier comment I made about his lack of good foreplay in response to him grabbing me, pulling me toward him, and telling me how I could put out. wow. i really hate where this has gone.
at January 26, 2019 No comments:

Harvey the Hurricane, control (NOT), and cats

Today was a day of diligence. I cleaned the Nubby Buddha and managed to change ALL their litter boxes, plus the inside litter boxes, and bird cages, just in time for the garbage pickup. I built up the rocks around the little gold fish pond with the hope that the baby fishes won't get washed away by the impending flood. I looked after the stray momma cat and her three kittens whom I relocated from the back porch to the shed. I went out to Home Depot for night lights and rubber gloves. Went to Walmart for wine, nicorette, and canned cat food. I talked to both Mom and Gordy today. Harvey the Hurricane is expected to make landfall close to Corpus Christi. Gordy's Mom and Sister live there. They seem to be prepared. John Michael texted me tonight to see if we were okay and ready for the storm. I received a text from Carol, who is the new TA for Java @ UH. She's just lovely. She said a few people had dropped by to ask about me. One of them is a professor who is such a nice fellow.

Tonight, I watched the movie "The Immortal Life of Henrietta Lacks." It was weird because I had just started reading the book and the movie popped up on Hulu. It's a good movie, sad, and moving.

As I was vacuuming the living room @ 1:00am tonight I had to laugh at myself. Vacuuming before a major storm is just like me douching before going to the hospital to give birth to my first child because I was afraid what the docs might think of my unkempt kootchie...my dumbassary.

Despite my valiant attempt to control perception, neither the floor, nor my kootch are squared away.

I hope everyone on the Texas coast (and inland) remains safe and sound throughout Harvey's visit. That's all I have to say for now.
at August 25, 2017 No comments:

Gordy and I were talking tonight after the 3rd Defenders show. We were talking about Leon Redbone's version of "Shine on Harvest Moon" and that somehow led to me admitting that Neil Diamond is one of my favorite male vocalists...and that led to my admitting that as a young girl, getting to see Jonathan Livingston Seagull in the movie theatre was transformative for me. You know, that scene where Jonathan flies higher than all the other birds. Yes!!!! Take that, unbelievers and assholes!

Gordy immediately purchased it from Google, and now we watch.
at August 18, 2017 No comments:

So, today I made a batch of black beans using the leftover drippings from last night's carnitas. I'm not going to lie, the aquafaba, the bean juice, whatever it is called was freaking fabulous! However, I totally messed up the heavenly bean nectar by tossing a couple of smoked pork necks that I had purchased from the grocery. I wanted to add a little meat to the mix and didn't realize HOW MUCH SALT (yes, screaming) was in them. Oh geez! Don't get me wrong, I am no pussy when it comes to the indiscriminate use of salt. Those salty pork necks turned my best beans ever into the Dead Sea of Legumes. No manner of kale, carrot, nor potato could rid my prize-winning black beans of the overwhelming salinity that took over. *sigh*

Now on to drowning my sorrow in copious amounts of cheap Woodbridge Sauvignon Blanc and binge-watching the new Netflix series "Defenders" while farting like a mule...assuming mules fart a lot.

Gordy has been playing his guitar all night. He is really getting good!

My Dad had some kind of crazy 5 hour surgery to remove cancer from his lip. All I know right now is that they took away so much tissue that they had to reconstruct his lip from the inside of his mouth. As much as I would like to have called him just to say "I love you," I couldn't bare the thought of him struggling with pain just to talk to me. So I texted instead. He responded. He always refers to himself as "Pops." One time, Mom eluded to her distaste for him calling himself "Pops." She said that it implied a closer sense of familiarity and kinship than "Dad" does. I don't get that at all. To me, "Pops" would be something I would expect to hear in a NY Italian gangster movie. Anyway, after Mom's comment, it makes me wonder if "Pop" is Dad's way of conveying a closeness.

Pork carnitas and whatever...it's so hot outside, who cares?! 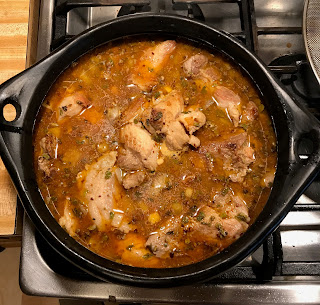 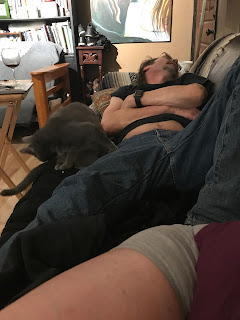 The pic of the carnitas was taken prior to 2.5 hours of simmering followed by 30 minutes of roasting and shredding @10 minute intervals of basting in the juices. PLEASE, let me tell you that this shit was good, dayum good. The best I have ever eaten.

Yesterday, my Dad had some kind of lip surgery to cut out skin cancer. I don't know how it went. He told me he would call after the procedure and let me know how it was going, but he didn't. I did not want to bother him with calling especially if he was having a difficult time. I text messaged him early this evening (no response) maybe I will try to call him tomorrow.

I went to the new HEB in the back of Kingwood tonight. That is one helluva huge and sprawling grocery store. I tell you that we fat lazy 'mericans are a lucky bunch to have such a variety of food available at our fingertips. That store is a cornucopia. I felt inspired, yet frustrated as I had to keep running back to the produce section for accompaniments to meal ideas. I'm ashamed of my "first world" problems. None the less, I got stuff to make carnitas, veggie kraut, Thai chicken in coconut soup, and more!

I'm going to use the left over broth from the carnitas to make a new batch of black beans tomorrow. I know they will be good! 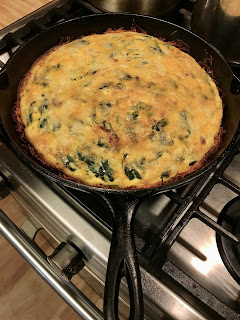 One reason this recipe caught my eye is because the quiche is baked in a cast iron skillet. At a glance one might assume it is a one skillet meal kind of gig... but actually, I dirtied a shit ton of dishes.
at August 09, 2017 No comments:

O Brother Where Art Thou?

This music is wonderful... https://www.youtube.com/watch?v=HIXbh-VhaFg

Especially this one! Oh my. https://www.youtube.com/watch?v=i1wZVVMKojw

And on a completely different musical note: Ramble On
at August 09, 2017 No comments:

This morning I woke up late after having stayed up until 3am with Gordy who was on work conference calls with participants from all over the world.

For breakfast I fried up potatoes with garlic and onion in ghee, cooked a couple links of andouille sausage, sauteed some kale, and fried eggs sunny side up. Gordy loved it! I have to say it was surprisingly satisfying in that I felt full well before I had finished my food. I wonder if cooking with ghee has anything to do with my feelings of fullness? 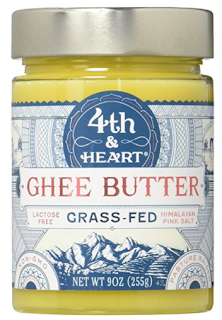 Our local grocer has started stocking a brand of ghee called "4th & Heart." It's a little pricy for sure, but I was intrigued by the fact that it is made from grass-fed cows, and it is salted with Himalayan salt. Most of the ghee I have seen is unsalted and in the past I did not care for the taste or smell of it so much. This stuff is good! Also, it does not require refrigeration. I looked on Amazon's website and it can be purchased through them at about $3-4 less a jar, if you subscribe to regular deliveries.

Here's a link to the ghee on Amazon: 4th & Heart ghee 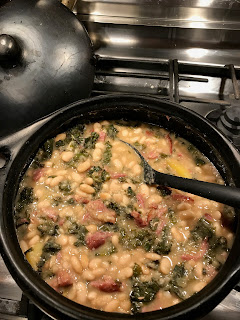 I started a batch of navy beans that I had soaked overnight. I always forget how white beans seem to cook faster than the darker beans so I ended up scooping out most of the beans and letting the smoked pork necks to cook down more. I used bone broth and regular chicken broth for the bean liquid, added about 10 cloves of garlic, fresh parsley, and Mexican oregano. I felt like the broth was a little too salty so ended up adding a potato to the pot hoping that it would soak up some of the salt. Then about 30 minutes before serving I added a bunch of chopped purple kale to the slow simmering pot. Overall, the beans taste good. 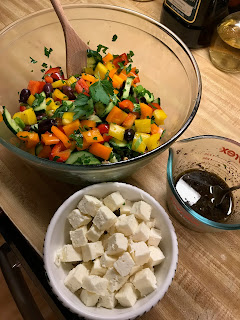 The Greek-style bell pepper salad is very good. I LOVE the dressing. The salad is a mix of chopped up cucumber, one each of all colors of bell pepper, pitted Kalamata olives, fresh parsley, green onion, and cubes of feta cheese. The dressing is a mix of olive oil, white wine vinegar, Sumac, Za'atar, minced garlic, pink Himalayan salt, and pepper. This dressing tastes very much like the dressing on Niko Niko's Greek salads.

As for TV last night, we started watching a comedy zombie series on Netflix called "The Santa Clarita Diet." It's kind of cute.
at August 08, 2017 No comments:

Learned about an interesting test you can do yourself using an Amsler Grid. This website tells you what to do and provides a printable grid that you can hang on your wall and test yourself.

Brief but Good Info about Diet and Plantar Fasciitis

The diet and supplement info is toward the bottom of the writeup.

So... eat better food comes up again and again, no matter the malady I am reading about.
at August 06, 2017 No comments:

It has been that slow creep from silent defense shields in place to tiny snippets of less awkward conversation sometimes accompanied by an o...

Michael-Ann
i yam who i yam and dats all i yam.